Hue is a laid-back destination with a rich cultural heritage

Perched along the banks of the peaceful Perfume River is the ancient city of Hue. The former imperial capital of Vietnam, visitors can sense (almost immediately) that this city is quite distinct from rest of the country. To understand the uniqueness of Hue, one must get to know its history a bit better…

Between the years of 1802 and 1945, Hue was the reigning hub for the Nguyen Dynasty. At the heart of the ruling family (and the city itself) was the Imperial Citadel: a fortified compound with a “forbidden city” at its epicenter. Built in the likeness of Beijing’s Forbidden City, this inner enclosure was open only to members of the royal family. Trespassing into the citadel itself (without permission) was a crime punishable by death. Outside the citadel, the reaches of royalty infiltrated the city. Affecting the culture, food, religion and everyday lives of the citizens, it’s traces of these royal roots that still define and mold modern day Hue.

The Uniqueness of Hue

From the origins of the Ao Dai (Vietnam’s national dress for women) and one of the country’s oldest (and most prestigious) high schools to the plethora of fully functioning Buddhist temples, Hue is Vietnam’s unspoken cultural capital. Locals carry a sense of pride with their home city, the atmosphere is tranquil and sophisticated and the city lacks that chaotic buzz that so often defines Vietnam. Walk along the banks of the river during the day, through the dimly lit streets at night or amongst the ruins of former royalty and you’re bound to pick up on this special ambiance. 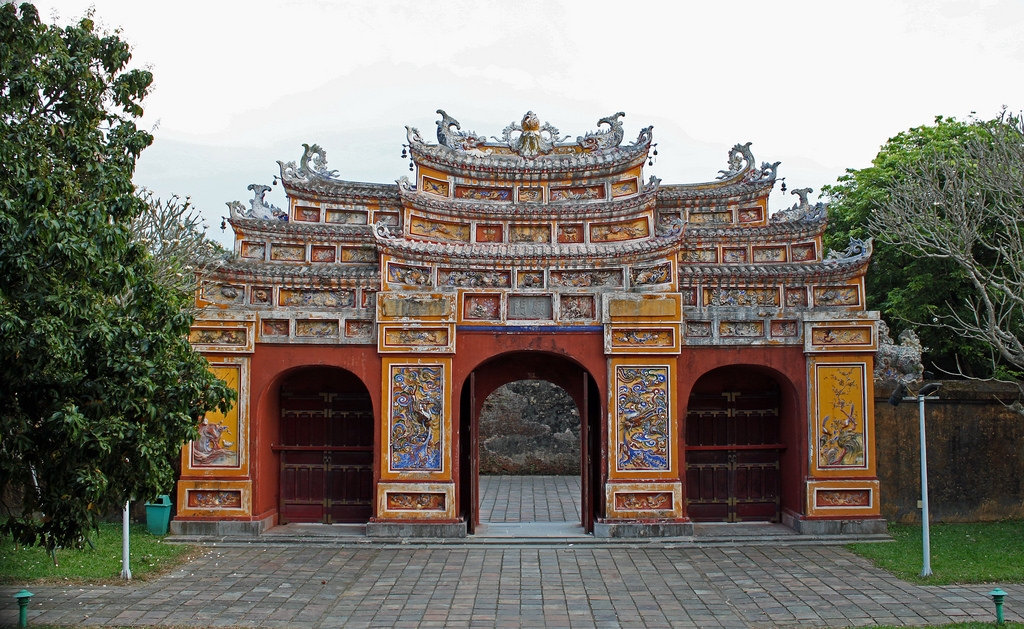 What to See in Hue

Visitors coming to Hue for the first time are undoubtedly going to want to visit the Imperial Citadel. Situated in the heart of the city, it’s the perfect place to get acquainted with Hue’s rich past. Unfortunately, a great amount of the compound was destroyed during the American/Vietnam war, but great efforts are underway to preserve (and rebuild) this incredible piece of history. Breathtaking gates with vibrant mosaics, expansive squares and ancient temples, courts & pavilions- they’re all located inside the remains of the citadel and make for a fascinating day.

Tip: You can explore the citadel on your own, but taking a guided tour may prove to be a bit more informative… particularly in places where ruins can’t tell the story 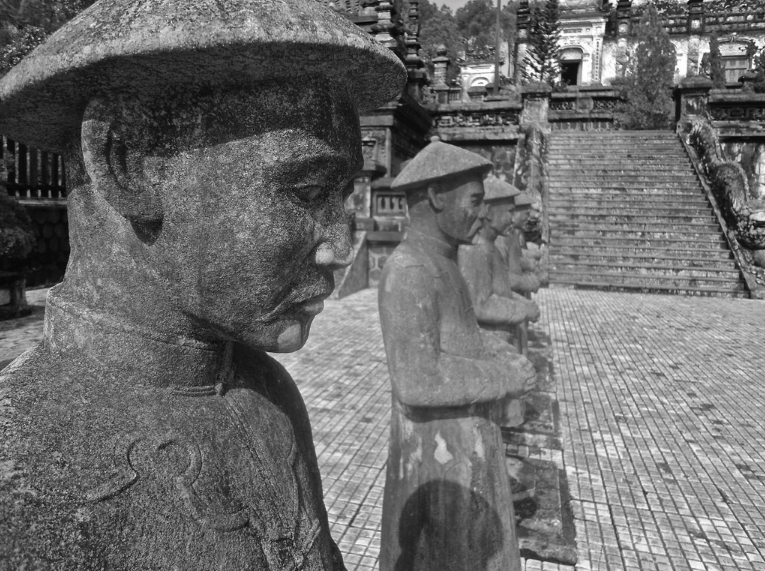 Hue is also famous for its royal tombs. Tucked along the banks of the Perfume River, visitors can find a range of grandiose burial sights dedicated to Minh Mang, Khai Dinh, Tu Duc, Gia Long and other past royalty. Elaborate architectural styles, giant stone guardians, sprawling terraces and tranquil locales define each individual tomb, which, combined with a tour down the Perfume River, make for another memorable day.
Other unique visits in the city include the seven-story Thien Mu Pagoda (the tallest religious building in Vietnam and the icon of Hue city), Quoc Hoc High School (one of Vietnam’s most prestigious high schools, also where Ho Chi Minh graduated from), the Hue Provincial Museum (military exhibits) and the stunning An Dinh Palace (private residence of the Royal Family).

As Hue was a major site during the infamous Tet Offensive of the American/Vietnam War, trips to the DMZ (demilitarized zone) are a popular day excursion for many visitors. About 43 miles north of the city, visitors can explore the former boundary between North and South and the sites that accompanied it. While there aren’t many wartime items left over, some foundations and monuments still exist, as do the poignant stories that accompany them. 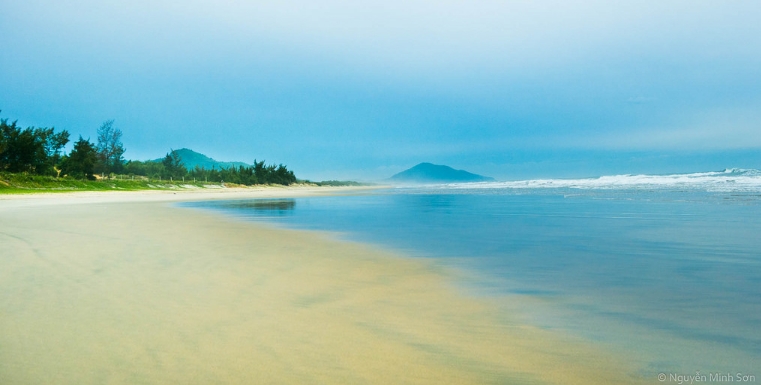 For those looking for something a bit more light hearted, Hue is surprisingly close to the coastline! A short drive brings you to Thuan An Beach, arguably one of the most beautiful beaches along the coast of Central Vietnam. A bit further down the road (back to Da Nang) brings you to Lang Co, which boasts empty stretches of golden sand beaches and pristine salt waters. If you’re looking to get a bit off the beaten path, just north of Lang Co is Suoi Voi, or Elephant Springs, where visitors can cool down in natural spring waters bubbling through the mountain terrain.

A Taste of Hue

With its royal roots comes a royal palette! Hue is famous for its delicious cuisine… a must try for anyone spending some time in the city. Bun Bo Hue (vermicelli beef soup), Com Hen (rice with mussels), Banh Khoai (crispy rice cakes with savory fillings) and Banh Beo (steamed rice cakes) are some great local selections, as is the city’s vegetarian cuisine. Com Chay (vegetarian food) is exceedingly popular in Hue, due to the high amount of Buddhist practitioners in the city. Anywhere you can find a high concentration of vegetarians, you’re bound to find some of the best vegetarian food in the world. Even if you’re not particularly interested in eating vegetarian, give it a try… you may be surprised! 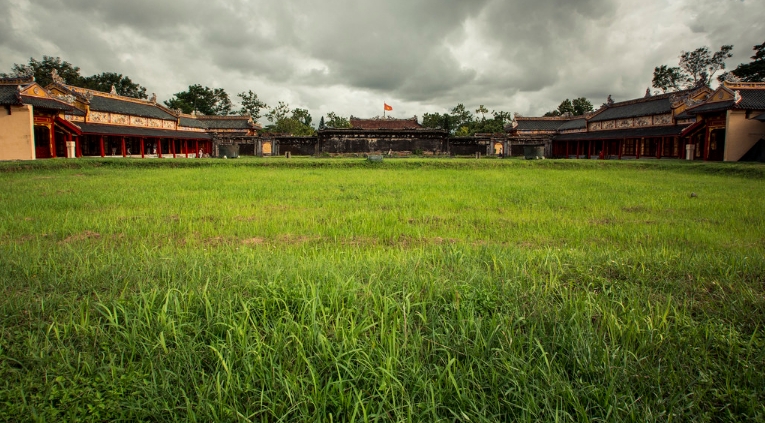 Hue is unique in Vietnam not only for its attractions, but also for its charming atmosphere. While there are some amazing things to see in Hue, it’s not always about checking everything off the list. Many visitors prefer to sit riverside, enjoy the quaint cafes and local restaurants, exploring the art scene and getting to know the locals. Hue is a laid-back destination with a rich cultural heritage; relax, explore and take your time getting to know this truly distinct destination - Vietnam’s unsung cultural capital.